We are continuing to work with the Rwandan Community Pharmacists Association and the University of Rwanda and our second pilot study is taking place in Kigali in August 2019.

We have taken account of feedback from our first study in Rwanda where worked with  pharmacists and pharmacy users to produce and evaluate a set of materials to explain the dangers of antibiotic resistance.

Our new materials use a revised visual identity made by Design Science and illustrations by Nikoletta Karastathi.  They have been designed by members of the project team in collaboration with colleagues in Rwanda.

Here, team member Manjula Halai, tells pharmacists in Kigali how to use the materials in their pharmacies: https://youtu.be/z4HAkRG4pNY

Our third Beat Bad Bugs Rwanda (BBBRw) workshop was held in Reading on 28 and 29 March 2019. It brought together colleagues from Rwanda representing the University of Rwanda and Rwanda Community Pharmacists Union, the Commonwealth Pharmacy Association, Design Science and academics from numerous disciplines at Reading and other UK universities.

On Day 1 we reviewed the project work in Rwanda taking account of feedback about materials that were being piloted in pharmacies inRwanda, and considering our next steps. The second day was broader in scope, with short presentations about AMR-related projects where design, communication and education were prioritised.

By way of reflection. Our intention in the IDAPPS project, and work emerging from it, was to draw attention to the role of design – particularly information design, user-centred design, architecture and interior design – in communicating information about AMR. We realised that for many people involved in public health communication, design is something that is considered at the end of a project to make materials or products ‘look good’,or to align with particular brand guidelines. Yet design is much more than this. As the IDAPPS project has demonstrated, it is a catalyst for innovative thinking.  This is what we need if we are to help people understand the threat of AMR.

IDAPPS and BBBRw reinforce that designing involves thinking about the needs of stakeholders and end users, about the context and circumstances of use; and about how materials can be evaluated and behaviour change measured. To this end, we have used workshops where ideas have been developed in cross-disciplinary teams: pharmacists, patients, pharmacy users, designers, biological scientists, doctors, psychologists and those with expertise in behaviour change.

In the world of design research and practice this approach is not new as affirmed, for example, by Cooper and Tsekleves’s recent edited volume Design for Health (2017). Many of the projects included in this book, as with IDAPPS and BBBRw, reveal that for non-designers a ‘design-led’ way of working can be empowering, engaging and stimulating. It can lead to understanding and assurance that they have been involved in developing or making something that is likely to make a difference. This way of working also has a history, and the work of Otto and Marie Neurath who made a series of charts about tuberculosis in the 1930s is a good example of this. You can read about this in my paper here: 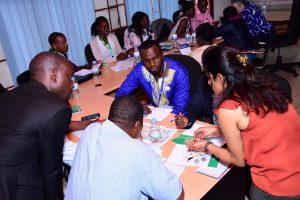 Our workshops in Rwanda used principles of co-design to understand how information about AMR could be conveyed in Rwandan community pharmacists.

In workshop 1 in Kigali, we worked with pharmacists, pharmacy students, patients and pharmacy business owners to explore access to antibiotics in Rwanda and the interventions that the attendees thought would be helpful to help prevent the development of AMR. We identified the kinds of messages and material forms relevant to Rwandan community pharmacies and patients.

As a result of this workshop we produced a set of cards explaining AMR and guidance about how to take antibiotics was produced to assist pharmacists in communicating this to patients. An ‘antibiotic record card’ for patients enabled pharmacists to record details of what was dispensed. The materials were produced in English and Kinyarwanda.

At a second workshop we reviewed the materials and developed communication strategies to help pharmacists have conversations with their patients about AMR. We considered the kinds of illustrations that may help with AMR explanation, and did role play where participants enacted scenarios using the prototype materials to develop communication strategies to discuss AMR in pharmacies. At a meeting in a village primary school, teachers, children, sports reps and village chiefs gave initial feedback on the ‘antibiotic record card’.

The materials are now being piloted in 4 community pharmacies in Kigali, and feedback from these will inform our final set of materials.

We displayed our competition winning entries at Day Lewis’s national conference on 24 November 2018. We were delighted that both caused much interest and were well received.

Feedback supported both approaches and provided valuable information that we shall take account of as we develop the idea. Lack of space in the smaller Day Lewis pharmacies was raised by several people and we had useful conversations about the ways in which the ideas could take this into account. We asked delegates which of our prototypes they would enhance their pharmacy Healthy Living displays, and were pleased to find that there was no clear favourite!

Delegates had to answer a question based on the display. The answer to ours was found on one of the Good Bugs / Bad Bugs cubes:

Visitors to our stand received a ‘goody bag’ with information about the project and each of the winning entries. While many delegates wanted to take home our knitted bugs, they had to make do with our specially-designed postcards.

We have been successful in getting funding from the University of Reading’s GCRF Strategic Fund for projects to develop strategic partnerships. We will be working with The Commonwealth Pharmacy Association, The Rwandan Community Pharmacists Union and University of Rwanda to raise awareness of AMR in community pharmacies in Rwanda. Working with Design Science, our starting point will be the work of the Beat Bad Bugs competition team that comprised pharmacists, designers, architects, and behavioural scientists.

Through workshops in Rwanda and the UK we will extend our IDAPPS work to a Rwandan context and consider how the socially inclusive and convenient environment of a community pharmacy can be used to raise awareness of AMR, and specifically of the misuse of antibiotics. We plan to develop Beat Bad Bugs so it is relevant in Rwanda, and to consider how use of a mobile app might extend the messages to rural communities.

Our partnership with Day Lewis has results! Our competition winning prototypes are under review in the Day Lewis pharmacy in Woodley, Reading. We are asking visitors to the pharmacy what they think and whether the displays have an impact on their views about AMR.

A next step is to display these at the Day Lewis conference in November 2018 where attendees will get a chance to choose which one they would like to see in a pharmacy near them.

IDAPPS is on display at the Design4Health conference in Sheffield, 4–6 September 2018. ‘Towards the persuasive pharmacy’ shows the work of our 5 competition teams. We show the ideas that emerged from the teams of designers, architects, behavioural scientists, and pharmacists.

The IDAPPS team is also presenting a paper about the project: Design, architecture, pharmacy: making a difference to understanding anti-microbial resistance (AMR).

The paper introduces the working methods and outcomes of work to consider how we can use space within a pharmacy to encourage people to engage with information about AMR and self-care; and how we can design information so it is understood, whether on paper or in digital form. The research methods included review and analysis of archival material relevant to presenting information about drug-resistant infections; hierarchical task analysis; and co-design workshops with pharmacy workers and users.

Antimicrobial resistance threatens healthcare, many of the breakthroughs in healthcare are reliant on antibiotics – a valuable tool post-surgery. Some are suggesting that if antibiotics no longer work then not only will bacterial infections be much more serious, but the hospitals will have to stop routine surgical procedures.

Threats can help us to be inventive. It is often suggested that during periods of war, the government spending will often more generally, foster innovation and economic growth. The American interest in science and technology, during WW2 had the benefit of later economic growth. indeed, ideation may be similar, individuals are thrown into groups or even countries with new and different ideas.

Otto Neurath – of Isotype renown – was connected with the members of the Vienna circle who  emphasised the value of evidence that was empirical or directly observed. Given the time period and cultural background within which Neurath was situated it is unsurprising that scientific knowledge and communication was heralded as a unifying force for society. That is not to say that he thought science or communication was not value laden, but he viewed it as without social or cultural prejudice. He wanted to express complex information in a way that was understandable to everyone developing a visual pictorial system as he was aware how important visuals are to our daily life, he understood that

‘Modern man receives a large part of his knowledge and general education by way of pictorial impressions, illustrations, photographs, films. Daily newspapers bring more pictures from year to year. In addition, the advertising business operates with optical signals as well as representations…’, so no surprise then that information about health was part of his preferred repertoire of visual communication.

Neurath’s work can inspire us to simplify information by making the message unambiguous, rather than by manipulating emotions, and trying to scare people into behaving in a certain way. He thought that information was potentially socially liberating.

How to connect with different messages? Another member of the Vienna circle had some interesting ideas that may contribute to this debate. Paul Lazarsfeld studied the way that US citizens decided to vote in presidential elections, suggesting that communication is more than providing people with information, it operates in a two-step model. Information is filtered through your primary circle of family, friends and acquaintances where the information is discussed and debated. Some members of this circle may be more influential, like ‘opinion leaders’ who receive the information and then discuss it and reinterpret it, others then construct and reinterpret the information, but it is the ‘opinion formers’ who influence individuals to change their opinions, attitudes and behaviours. Lazarsfeld thought opinion leaders had more influence on people’s opinions and behaviours than the media. The reasoning behind this was that opinion formers are trustworthy seen as giving opinion without any self-interest of personal gain, while the mass media can act as a reinforcing agent.

So, what has this to do with helping people understand the dangers of drug-resistant infection?

We can provide the information in a clear manner using infographics and also in a way that can stimulate or connect with the conversations and debates surrounding the issue. Our project competition provides an opportunity to enhance the interaction between information designers and architects, people who use pharmacies and not least, community pharmacists who have the potential to be useful opinion formers, and champions against the inappropriate use of antibiotics.

Each of these teams will join us at a 2-day Ideas Lab on 30 April and 1 May 2018. Held at the University of Reading, this will include talks and presentations by members of the IDAPPS team to define the scope of the project. Colleagues from our pharmacy partner, Day Lewis, will be in attendance to talk specifically about the pharmacy that will host our competition winning entry. Pharmacy users will be invited to join us to collaborate in the design process, and the teams will develop their ideas in discussion with the project team, and with each other.

We are looking forward to a busy and stimulating Ideas Lab.  Congratulations to our teams!

We are looking at examples of health communication from the past: printed ephemera, campaigns, films to find out how designers and others have used images and language to get their messages across. We are looking at, for example, different ways that sneezing and germs have been represented. Here are some examples: 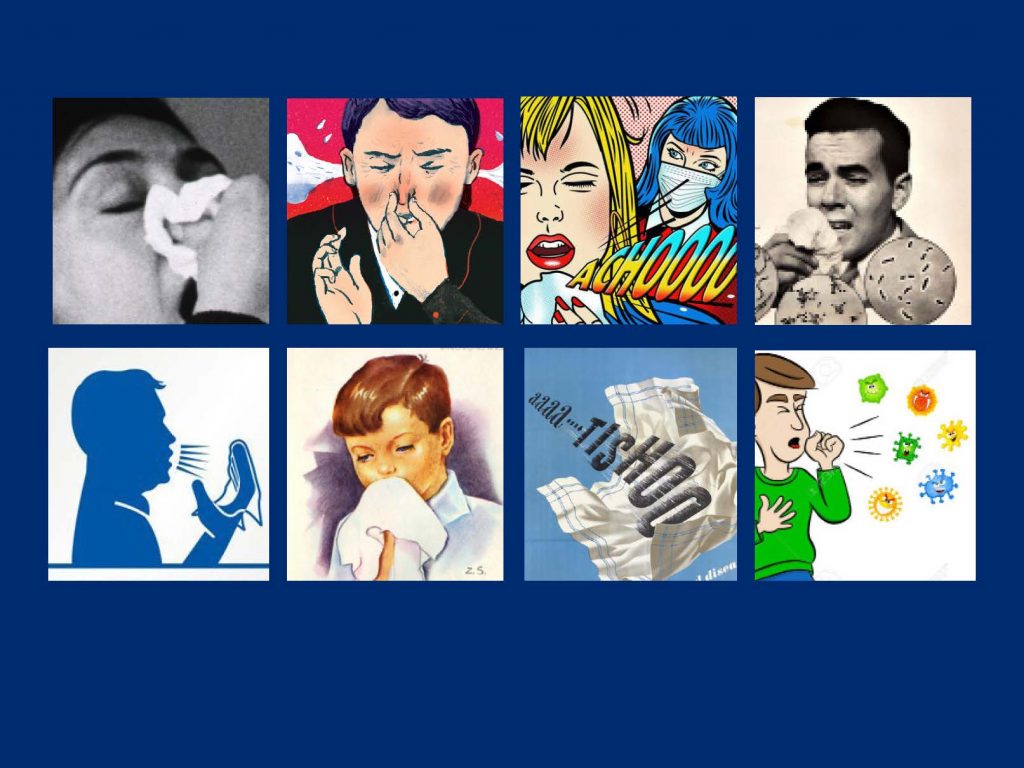 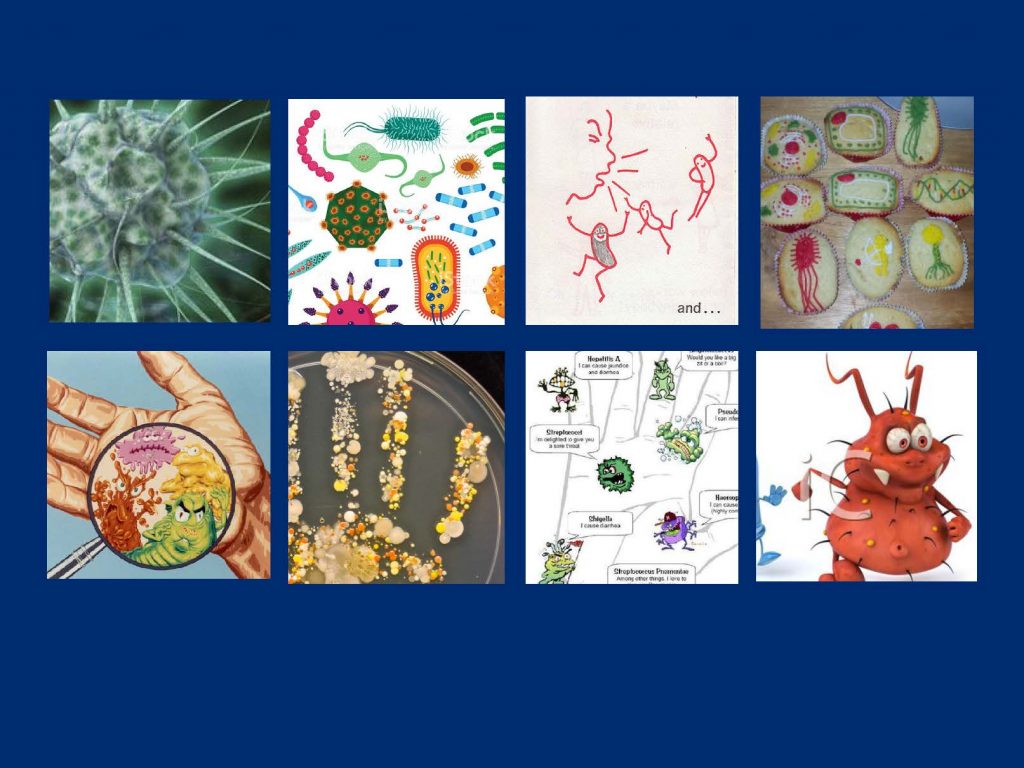